With heartfelt gratitude to those who inspired, facilitated and participated in the project

The roots of this project lie in a conversation I had with Fiona Aldred who had heard about the ‘Past in Mind’ project run by Mind Herefordshire. I mistakenly thought she was referring to the earliest Operation Nightingale digs organised by the MoD but agreed that archaeological fieldwork might serve as a useful therapeutic activity for some of our service users or members at Mind Aberystwyth. 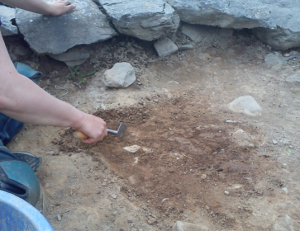 A pilot project was arranged for the summer of 2014 at a dig organised jointly by the University of Wales Trinity Saint David and Dyfed Archaeology Trust. In the event, only one member attended but she was enthusiastic to do more. In 2015 we sought to expand on this and arranged with Quentin Drew of the University of Wales Trinity Saint David school of Archaeology, History and Anthropology for members to excavate at Strata Florida Abbey.

The aim of the project was to provide Mind Aberystwyth members with an experience of archaeological fieldwork to inspire, enthuse and to help build positive feelings of camaraderie, confidence, self-worth and self esteem by working as a team, performing intricate and delicate tasks under difficult conditions. It also provided an opportunity to get out into an area of beautiful countryside and to connect with a significant historical site on emotional and intellectual levels. I believe this project is particularly beneficial because participants are not just working to keep themselves occupied but actually contributing to a genuine professional project contributing to society. 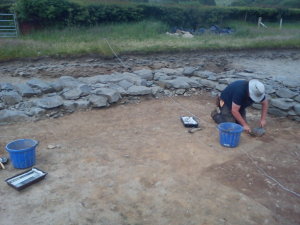 Care needed to be taken that the members attending would be treated in a manner not likely to cause them distress. It was therefore decided that the project would take place after the students had left the site and only supervisory staff along with one or two volunteers were present. One problem that presented itself was that the university required anyone volunteering on the dig to pay £50 for the privilege. We were able to avoid this charge, which would have placed the cost outside the means of participants, by arranging to use Mind’s insurance rather than the university’s.

So it was that I collected three members from Mind at 09:00 on Monday 15th June. We arrived on site about the same time as the dig staff and were given an introductory talk by Quentin Drew the dig director. He explained the history of the site and spoke about some of the finds made. We were set to work trowelling the floors of the rooms in the gatehouse. Two members found the work quite arduous due to their physical health conditions but nevertheless contributed fully for the whole day. All three members got on well with the excavation staff.

At 09:00 on Tuesday two of the Monday participants returned along with one member who had not been able to attend then. We continued to trowel the floors of the rooms and investigated a couple of postholes. The day ended with a request from Quentin to pass on the names of those who had participated so that they could be included in the list of people who had worked on the dig.

After the success of this session I organised for further participation at the Llanllyr nunnery site I had taken a member to the previous year. This also consisted of two days work but on the Mondays of two consecutive weeks rather than two consecutive days in the same week. 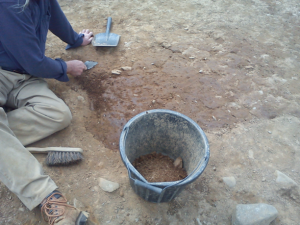 The first of these was the 6th of July. The weather forecast was not good. Rain was predicted for the whole day. Having been caught in torrential rain the previous week I was half hoping that no-one would turn up but one member arrived and we invested in waterproof trousers at Charlies and drove to the site. We arrived there to find everyone sheltering from the rain. The dig was directed by Fran Walsh of Dyfed Archaeology Trust. Most of the other diggers were known to me due to having studied archaeology at Lampeter. There were short lulls in the rain but not short enough to start work through most of the morning so the Mind member kept the others entertained by demonstrating origami. Around 11:30 a sufficient break in the rain permitted us to remove the tarpaulins and begin to clear the weeds and mud from a cobbled surface which had been discovered the previous year. My companion continued to demonstrate his craft and ingenuity when his boots began to fall apart and he performed a temporary fix with plastic carrier bags and string.

The second day at Llanllyr was Monday 13th July and was again marred by wet weather. Nevertheless both members who attended got stuck in and enjoyed the experience. They seemed happier and more confident. I am convinced that archaeological fieldwork constitutes a very effective therapeutic activity for Mind service users and members.

Trauma Sensitive Yoga with Meriel Goss is an evidence-based adjunctive intervention for women proven to be therapeutic or complementary to existing therapy. This new… Read more

We are excited to announce that we are re-starting our walking group in early January 2023. The group will be open to all and… Read more

Mind Aberystwyth is currently gauging interest of those who’d like to take part in a flower arranging course. The Course will be 6 weeks… Read more